Gustavo Gimeno is Music Director of the Orchestre Philharmonique du Luxembourg (OPL) and of the Toronto Symphony Orchestra. He has been appointed as Music Director of the Teatro Real in Madrid starting from the 2025/26 season. Since the beginning of his tenure in 2015, Gustavo Gimeno has led the OPL in multiple concert formats in Luxembourg and performed with the orchestra at numerous leading concert halls in Europe and South America. With guest concerts in Germany, France, Austria, Hungary and Switzerland, the OPL and Gustavo Gimeno continue their successful touring activities of past seasons during this one as well, including their first tour of South Korea. Among the highlights of the 2022/23 season are the season opening with Martin Grubinger, the performance of Gustav Mahler’s Sixth Symphony as well as a concert featuring works by Witold Lutosławski and Ludwig van Beethoven with Maria João Pires as soloist. The OPL and Gimeno released nine albums together on the Pentatone label between 2017 and 2021 and have since embarked on a new collaboration with harmonia mundi France which has so far resulted in recordings of Gioacchino Rossini’s Stabat Mater and Igor Stravinsky’s Apollon musagète and L’Oiseau de feu. In addition, Gustavo Gimeno is a sought-after guest conductor throughout the world and has been invited to lead the Münchner Philharmoniker, the Staatskapelle Berlin, the Berliner Philharmoniker, the Orchestre de Paris, the Los Angeles Philharmonic, the Boston Symphony Orchestra, the San Francisco Symphony Orchestra and the Cleveland Orchestra, among others. He has a special working relationship with the Royal Concertgebouw Orchestra, which he leads regularly in Amsterdam and on tour. Gustavo Gimeno made his opera debut in 2015, leading Vincenzo Bellini’s Norma in Valencia. In 2020 he celebrated a great success at the Gran Teatre del Liceu in Barcelona, conducting Giuseppe Verdi’s Aida. In February 2022 he made his debut at the Teatro Real in Madrid with Sergei Prokofiev’s The Fiery Angel. At the Grand Théâtre in Luxembourg, he has conducted the OPL in Verdi’s Simon Boccanegra and Macbeth as well as Wolfgang Amadeus Mozart’s Don Giovanni. A native of Valencia, Gustavo Gimeno began his international conducting career in 2012 – when he was a member of the Royal Concertgebouw Orchestra – as an assistant to Mariss Jansons. He gathered essential experience as an assistant to Bernard Haitink and Claudio Abbado, who mentored him intensely and had a lasting influence on his career in numerous ways. 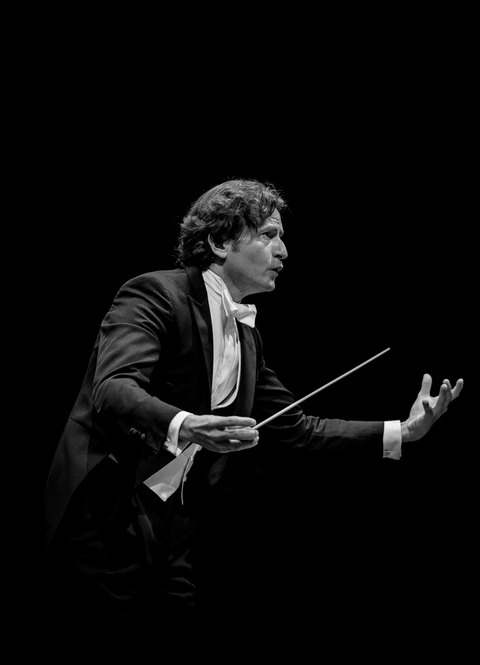