Too old to dare give his date of birth, Thierry Gavard was born in Verdun, France, which got him off to a bad start… After laborious and unsuccessful studies of the piano, which at least allowed him to wander the Côte d’Azur as a bar room pianist, he finally found an instrument that suited him: the double bass, which had only four or five strings to tame. Which led to studies in Nancy and later Paris and an opportunity to begin his orchestral career in an opera house pit with the greatest, although not necessarily the best known, conductors such as Jésus Etchéverry, Georges Sébastian, Nello Santi, Jean Périsson, Reinhard Peters, and Bruno Bartoletti. Appointed second soloist of the Nancy opera house in 1981, he was taken on by Léopold Hager and Louis de Froment as first soloist of the Orchestre Symphonique de RTL, which later became the OPL, in 1984. He has played regularly as first soloist in other orchestras, including those of Metz, Strasbourg, Nancy, and Antwerp, as well as the Orchestre Philharmonique de Radio France and the Orchestre National de Lyon, where he became familiar with Ton Koopman’s style. He and some friends from the OPL set up an original ensemble with four double basses, BassPanic, which plays jazz, Latino, Italian, and manouche (gypsy) standards. Has presented a show in a number of Luxembourg schools, with active participation by pupils: Chatons sous la pluie by Jean-Luc Girard, written for four double basses, a children’s choir, and an actor. Plays in Luxembourg for the EME Foundation. He plays a Krattenmacher double bass. 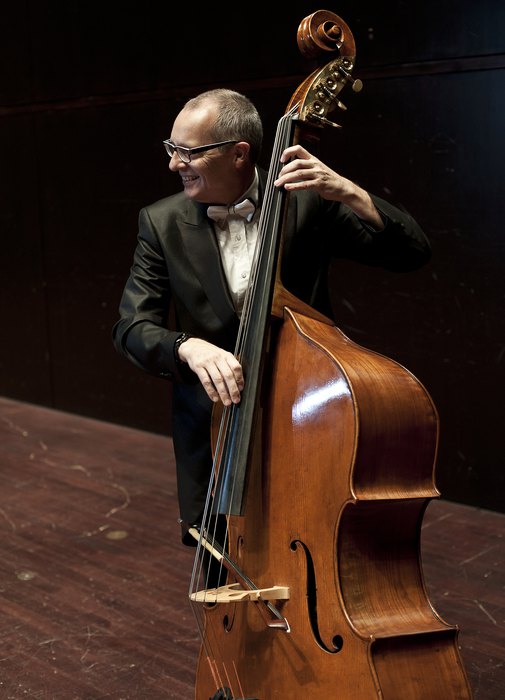