From rock to baroque

No one expected this to happen: On June 17 Ritchie Blackmore went back on stage to play Deep Purple and Rainbow material for the first time in nearly two decades. But fans shouldn't get their hopes too high as Blackmore insists: this was not a reunion. He has a few other dates scheduled with this line-up but then he'll go on tour with Blackmore's Night... his medieval folk band.

Ritchie Blackmore was not good at school. Believe it or not but the rock legend, irascible, always dressed in black, was regularly kicked out of class for talking too much. To say that it didn't click between the English education system and him is an understatement. Blackmore left school at 15, did odd jobs in factories and at 16 he hit the road as a professional musician, working for Jerry Lee Lewis and Gene Vincent among others.

Deep Purple
In 1968 Blackmore was living in Hamburg with his girlfriend when he received an invitation from Chris Curtis to join a band he was putting together with Jon Lord and that was managed by Tony Edwards. Curtis's erratic behaviour quickly got him kicked out and the band's name was changed to Deep Purple.

The band started making a name for themselves in late 1969 with Concerto for Group and Orchestra, a three-movement epic composed by classically-trained Lord and performed by the band at the Royal Albert Hall in London with the Royal Philharmonic Orchestra, conducted by Malcolm Arnold.

Despite the publicity, singer Ian Gillan and Blackmore thought of the project as «a distraction that would get in the way of developing their desired hard-rocking style.» Blackmore later said: «I felt that the whole orchestra thing was a bit tame. I mean, you're playing in the Royal Albert Hall, and the audience sits there with folded arms, and you're standing there playing next to a violinist who holds his ears every time you take a solo. It doesn't make you feel particulary inspired.» 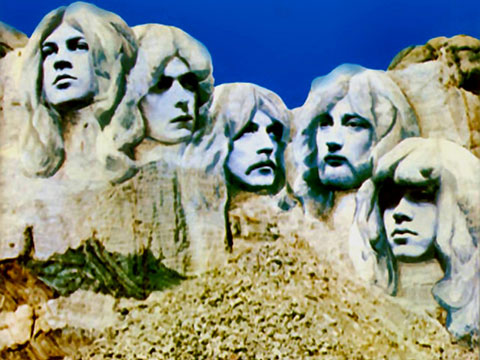 In a 1974 interview Blackmore explained how the band worked on the following studio album, In Rock. «I got fed up with playing with classical orchestras, and thought, 'Well, this is my turn.' Jon was into more classical. I thought, 'You do that, I'll do rock.' And I said, 'If this fails, this record, I'll play with orchestras the rest of my life.'» In Rock was their breakthrough: Blackmore's riffs, Gillan's singing/howling and Lord's classical influences set them apart from all the other rock bands of the time. The legend was born. The song «Smoke on the water» (1972)'s riff is now considered «the rock equivalent to the opening of Beethoven's Fifth Symphony.»

Rainbow
In March 1975 Blackmore recorded Ritchie Blackmore's Rainbow with singer Ronnie James Dio and drummer Gary Driscoll of Elf and cellist Hugh McDowall of Electric Light Orchestra. Blackmore was so happy with the result that he left Deep Purple in April the same year.

Blackmore actually took cello lessons from McDowall and started composing songs on the cello rather than on his guitar. «I had given up on the guitar between '75 and '78. I completely lost interest,» he explained in 1991. «I was sick of hearing other guitar players and I was tired of my tunes. What I really wanted to be was Jacqueline Du Prey on cello. So I started playing cello. (...) But you have to give your whole life to a cello. When I realized that, I went back to the guitar and just turned the volume up a bit louder.» However, classical music remained one of the band's key influences. Case in point: the title track from their 1981 album Difficult to Cure, a version of Beethoven's Ninth Symphony. (see video below)

From rock to baroque... to rock again
Rainbow disbanded in 1984. In 1997 Blackmore founded Blackmore's Night with his wife-to-be Candice Night with whom he shares an interest for renaissance music. They released their debut album, Shadow of the Moon, that same year. The record featured Ian Anderson of Jethro Tull on flute for the song «Play Minstrel Play». Since then, they've released nine additional albums and Blackmore stopped playing rock. So it was very unexpected to hear he had four gigs scheduled for June 2016.

As you can read on Metal Nexus, «Asked why he’s decided to revisit the Deep Purple and Rainbow material again, Blackmore stated 'I turned 70. And arthritis is starting to set in. Jon’s [Lord] not around. So many others aren’t around. You start to see your friends pass and just feel it’s time to play some of the old songs. Nostalgia is a big reason to do it, but not the only reason. It’s just having fun, but it’s only four dates in Europe. I don’t want to do anymore because I take what I’m doing now [i.e. Blackmore's Night] much more seriously.'»

The man may be deemed difficult by some people, in particular by some of his former bandmates. (Blackmore famously pulled out of Deep Purple's induction ceremony at the Rock'n'Roll Hall of Fame earlier this year.) But his irascibility doesn't take away the fact that he remains one of the masters of metal/classical fusion. He's put touches of classical music wherever the listener least expects it and turned his back on rock'n'roll to play medieval inspired music. But Blackmore's Blackmore, he gets away with everything.